ENDLESS HORIZON is a brand NEW 80′ Sunreef with luxury accommodations for 8 guests. She is an up galley, owners edition and has 1 master king suite with large walk in shower plus 3 spacious queen cabins, all en-suite with stall showers. Aft deck lounge and alfresco dining with comfortable seating and a bar. The sky lounge with 360° views and sun beds with upper-deck dining under cover.

Catamaran Endless Horizon is fully air-conditioned throughout. The En-suite bathrooms if bright and exudes class. You will be surprised at how wide the upper-deck walkways are and the ease of moving from the stern to bow on this beautifully appointed luxury sailing yacht. Enjoy the time of a life aboard Epic Catamaran ENDLESS HORIZON with 3 professional crew.

REQUEST A RESERVATION
Back to YACHT SEARCH
Pricing

*Please enquire about increased rates for Holiday weeks and other destinations 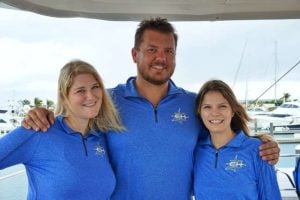 Darren Henn was born in South Africa and at the early age of four, his parents realized they just couldn’t get him away from the ocean!
Eventually at the age of nine, after moving to the beautiful Seychelles islands to grow up, Darren became a scuba diver at a young age all due to a family of divers and spent every day possible diving and spending time with his true underwater love! He full-filled his dream after following in this mother’s footsteps as dive instructor.

Darren then found a new love at the age of eighteen that he could share the ocean with; the yachting industry, where he began to work on a beautiful Dutch top sailed schooner dating back to 1912. This was the start of a new world for Darren that would lead him become diesel engineer with an MCA All Ocean 500 tonne captain license!

Darren has now been working with 11 years of experience in the private yachting industry and in term charters ranging from 60ft all the way up to super-yachts of 150ft. He has also worked all over the world ranging from the Mediterranean Sea, Indian Ocean, East Coast of Africa with pirates lurking around every corner to the beautiful Caribbean.As a fountain of knowledge, Darren always has an exciting story up his sleeve and loves putting a smile on a face while guiding snorkeling trips, island walks or just letting the guests enjoy a beautiful sunset while sipping a captains cocktail!

Sarah grew up in Germany close to the Coast of the North Sea where she soon discovered from an early age that being on the Water makes her complete. Therefore the decision to join the Yachting Industry 3 Years ago wasn’t a hard one. With a solid background in Hospitality, working in a Michelin Star Restaurant in Calgary, Canada or 2 years and working in the German Biergarten in the Epcot Center at Walt Disney World in Orlando, FL.

Her passion for cooking ignited in her early age. She enjoys fresh and healthy Foods, as well as the Italian Cuisine.
With this background it wasn’t hard to get her first Job as a Cook/Stew aboard a 95ft Motor Yacht. It became very clear, that she really enjoyed being a Chef. She was inspired and did a Yacht Chef Cooking Course in the beautiful South West of England at the Ashburton Cookery School.

Dominique Bouchier joins the crew aboard Endless Horizon as Deck and Stewardess.

Our family is so appreciative for the “best ever week onboard”. From the moment we boarded we were amazed at what a beautiful home we had. The captain took amazing care of us and provided the exact perfect spot and activity for each day. The chef prepared photo ready and delicious dishes at each meal. The chef kept our cocktails full and our hearts warmed as she cared to our every want and need. Best week full of family memories!”

This was truly a once in a lifetime experience. This was a surprise for my husband’s birthday and it beat all of our expectations. The crew were so warm and accommodating. They created a very relaxing and memorable experience for us! The weather was perfect and we saw the most breathtaking sunset. Highly recommend this boat tour to anyone!!

A trip to remember for sure. The islands were beautiful. The weather cooperated. And the food was awesome. But what made it special (besides the company also onboard) was having such an amazing captain and crew. The captain not only navigated well, but was an entertaining and knowledgeable host. We learned about the islands we were visiting, the sea life. Thanks! I highly recommend a tour with this yacht and crew.

It was one of the most amazing experience, Sonja and I made and we enjoyed every single minute of the trip. Beside enjoying the beautiful nature on the various islands and all the comfort on the yacht, I want to highlight the fantastic host of our captain and his entire crew. The captain is such a nice and enthusiastic guy with a great sense of humour to make this week even more pleasant. In particular I have also liked the creole food, prepared by the boats chef, who put one’s heart and soul into it. I sincerely hope, this has not been our last sailing cruise experience and would like to join this yacht anytime and anywhere again for such a great holiday. Wishing you all the best in the Caribbean and I will keep on following you which allows me to have a little “virtual” holiday every day, although in my professional life.

We were lucky enough to be on board a catamaran charter with this crew for 7 days throughout the BVIs. We travel a fair amount and to this day it’s our family’s favorite trip. We went in a little leery of what to expect thinking it might be too much time on a boat and nervous about sleeping tied to a mooring ball. The captains knowledge and skills left us feeling so safe and comfortable. Additionally he was great at reading people. We always felt we had our space but he added to the fun with stories of the sea up for anything personality yet the utmost manners. Our kids wanted him to join us in our adventures and dinners because we all loved his company. We hope to repeat this trip someday and would definitely do it again with this boat and crew.

by 2019 Guests on Epic Yacht Charters
Yacht Is Amazing

The yacht is amazing and we were living the life in the BVI! Gorgeous boat, unbelievable food, cocktails aplenty and great friends! We had a BLAST!!!!!

** Epic Yacht Charters BVI provides the most updated information on yachts available but cannot guarantee any details are 100% correct until we verify with the specific yacht.